Get three Maggie James novels for a bargain price with Shadows of the Mind Box Set 1! Currently retailing at Amazon at a 33% discount on the combined price of the three novels when bought individually. 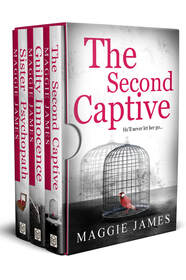 Read The Second Captive, Guilty Innocence and Sister, Psychopath in one bargain box set! Here are some tasters for what you can expect:

Beth Sutton is eighteen years old when Dominic Perdue kidnaps her. Held prisoner in a basement, she’s dependent upon him for food, clothes, and her very existence. Beth never allows herself to forget that her abductor killed his last captive. She has evidence to prove it, as well as Dominic’s own admission of murder.
Then Beth escapes…

And discovers Dominic Perdue is not a man who lets go easily. Meanwhile, despite being reunited with her family, she spirals into self-destruction. Release from her prison isn’t enough, it seems. Can Beth free her mind from Dominic’s grasp before he recaptures her?

Because if he does, he’ll kill her…
A study of emotional dependency, 'The Second Captive' examines how the mind makes dark choices under duress.

A decade after eleven-year-old Mark Slater’s conviction for killing another child, he’s finally released on parole. Only the twisted and violent Adam Campbell, also sentenced for Abby Morgan’s murder, knows the truth – that Mark played no part in her death.

Four years later Mark’s girlfriend is shattered when she discovers his grim past. With his protective cover blown, Mark’s need to confront the injustice of his sentence becomes overwhelming. Meanwhile circumstances have thrust him back into contact with Adam Campbell, who has become even more domineering and chilling. Can Mark rewrite history and confront his demons?
A gritty novel examining child murder and dysfunctional families, 'Guilty Innocence' tells of one man’s desperate struggle to break free from his past.

When they were children, Megan adored her younger sister. Now she suspects Chloe is a psychopath, who may be guilty of murder. Megan has no proof, however.
After their mentally ill mother becomes increasingly unstable through Chloe’s manipulations, events take an ugly twist. Chloe is out of control, and there’s little anyone can do about it. Until her actions threaten the life of Toby, the man Megan adores but from whom she’s hiding a tragic secret.

Threatened with losing everyone she loves, can Megan stop Chloe before she kills again?

A study of sibling rivalry and dysfunctional relationships, 'Sister, Psychopath' tells of the damage inflicted on one woman by her own family.

Available from Amazon in Kindle format

Available from Amazon in Kindle format. The link takes you to the Amazon store for your country.
Back to top of page