Get three Maggie James novels for a bargain price with Shadows of the Mind Box Set 2! ​Currently retailing at Amazon at a 33% discount on the combined price of the three novels when bought individually. 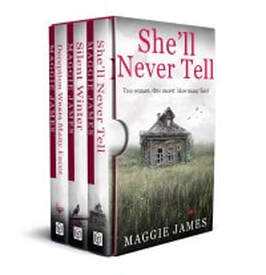 Read  She'll Never Tell, Silent Winter and Deception Wears Many Faces in one bargain box set! Here are some tasters for what you can expect:

The sudden death of her mother shatters Olivia Gilchrist’s world. Grief turns to shock when a post-mortem reveals Sonia has lied to her daughter in the cruellest possible way. Angry and hurt, Olivia vows to uncover the truth.

Meanwhile, Olivia’s neighbour, Elena, harbours a dark secret. Now the past has caught up with her, forcing Elena to go into hiding.

Then Olivia discovers Elena was involved in Sonia’s deceit. She has questions she’s desperate to ask her former neighbour. Olivia suspects, however, that Elena is warped and unstable. Tracking her down may be difficult and dangerous.

The temptation proves too strong, and a game of cat and mouse with a vengeful woman ensues. One that has the potential to turn deadly…

A gripping novel of psychological suspense, She'll Never Tell is the story of a decades-old secret that refuses to stay hidden.

On an icy November night, Drew Blackmore is beaten unconscious and abducted. He wakes to find himself in total darkness, naked and chained to the floor. Fed just enough to keep him alive, Drew is unable to identify his captor, or the reason for his incarceration.

As reality fades, hallucinations take over. Can Drew escape his prison before madness claims him?

Meanwhile, Drew's wife, Holly, despairing of ever seeing him again, turns to his brother for comfort. As dark family secrets emerge, Holly wonders whether she ever really knew her husband. Could his disappearance be connected with that of a prostitute years before?

A story of how the mind responds to solitary confinement, Silent Winter examines one man's race against time to survive hell.

​Lyddie Hunter is devastated when her sister attempts suicide after falling victim to a ruthless con artist. Driven by her own history of failed relationships, Lyddie vows revenge on the man who broke Ellie’s heart.

After assuming a false identity she hunts down Steven Simmons, a guy she knows to be cold, calculating and cruel. But deception lurks around every corner, and Lyddie's actions unleash a train of events that puts her life, and Ellie's, in grave danger.

Can Lyddie unravel the complex web of lies ensnaring them? Or will she and her sister pay the ultimate price?

A tense novel of psychological suspense, Deception Wears Many Faces weaves lies with self-deceit and maybe even murder…

Available from Amazon in Kindle format. Read for free if you're a member of Kindle Unlimited!

Get your copy here
Back to top of page